Weltschmerz. A German word meaning world-pain or world-weirdness, the depression you feel when the world as it is doesn’t reflect what you think it should be.

Sorry, quite a deep dark start. You get the idea.

This project was awesome, originally written to FLESHxPEAKI – The hate that finds you first

It caught my attention immediately.

So she wanted big, grungy, worthy of the title Weltschmerz. So I though glitchy was the way to go. I’d never really approached this kind of work before but its definitely a style I’ll stick with.

I started by making my hit points, the moments where the head falls off or the screen shifts – simple points to keep the beat of the piece going.

Distortion and effect plugins were vital for this so my bus list just built and built for this project each week. The tracks kept building and the sounds kept coming. It got a little out of control…you can see the project below and I know some of you will be thinking ‘Ha…thats nothing’ but Aaaaaaahhhhhhh so many tracks to keep my head around. 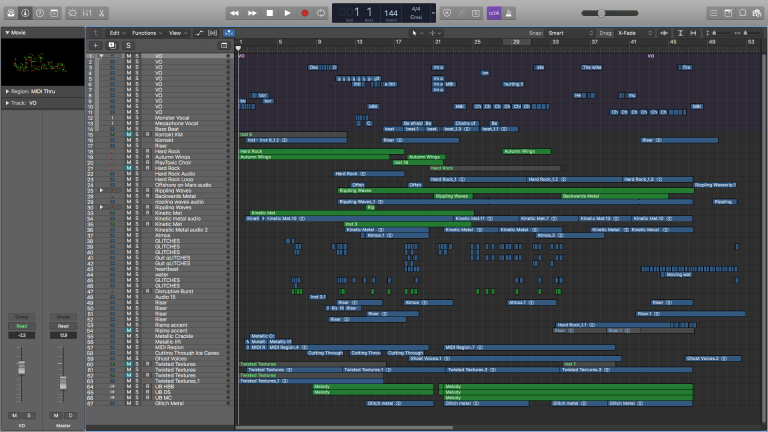 You’ll see that most of my tracks are bounced out…due to me being a poor student the wonders of Native instrument sounds are out of my reach so I just write them at my uni then steal the sound to edit at home. Its a struggle I suppose I’ll have to bear with…*hint hint maybe Native Instruments will read this and take pity*…got to at least try, haven’t you.

To be honest, a lot of my projects work around what logic provides and my own altered or recorded SFX sometimes implemented into the synths they have…but Twisted Textures….the beautiful sound of Twisted Textures…it fitted perfectly. It was needed. Those morphing lurking layers were key to keep this ever-evolving ambiance in the piece which I could then just layer over, meaning I could sleep at night knowing that the lower frequencies were filled with this ‘drone’.

The Voice Overs were fun. If you ever have the chance to record creepy vocals just jump right in. Not recorded on any fancy microphone, just the internal microphone in my laptop and a bunch of effect plugins to bulk them out and make my 20-year-old voice sound like a 5-year-olds…yeah that sounded less creepy in my head but child murder and disturbing phrases were on the checklist for the final sound I wanted to create…so I had to channel my inner child…yeah…I’ll stop before it sound even more creepy.

The Vocal Transformer on the Logic Plugin list was a lifesaver. My Welsh friend (who is full of impressions) and I pitched our voices up a little when originally recording to get those slurs that you hear when a kid speaks and shifted the tones up a little within the plugin. Add a bit of distortion to shift it into eerie voice-over and hey presto! You have a child saying menacing phrases that will keep you up at night.

Hear the difference below….

As you can hear, my voice is a liiiitttllle different.

That’s got a bus send to a Vocal Transformer, a Space Designer Reverb, Echo, and Distortion. I went crazy on the effects but I think its pretty convincing? Don’t you?

Let me know if there’s anything else I could do to enhance the sounds I’m making. Comment below!