“This is my first time collaborating with anyone for music on a film piece”….don’t worry it’s my first collaboration as well

We needed Jukebox music, we needed sound FX and Foley and we needed a subtle but dramatic rise in the music that wasn’t too overpowering within the piece. Right. I guess that’s doable?

I was told, always say it can be done and then figure out the how afterwards. So ‘Of course I said’, ‘I can do all of that’ I said, but I wasn’t worried one bit – If you’re passionate and excited about the animation, you can do anything.

I knew I wanted to go similar to the original sound she had been working with (Fats Waller – Ain’t misbehavin – a classic and a favourite of mine) so I started with the idea of a blues/jazz piano…maybe a bass…maybe some brass. The vision was there but there was just one teeny tiny weeny problem

Like most modern computer musicians, I favour the electronic side and when you input the notes like you can see below, its all singular lines – one hand playing at most! If I needed harmony its either play it in then move it up on the computer or copy and paste and simply shift it up a 3rd

Friend who plays the double bass looking upset that I’m not using their musical skills. Check. 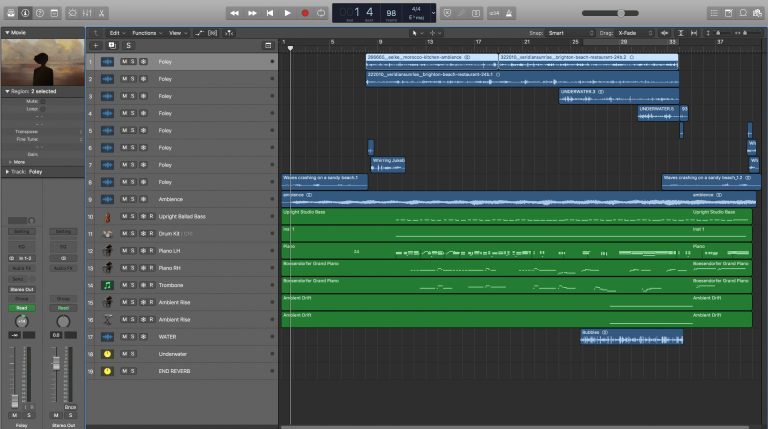 First stage of my plan was to get the piano playing correctly, the harmony would be there and then the timing of the other elements could be morphed around that.

It took a while.

As you can see from my project, I split it into RH piano and LH piano, Chords and melody. You might think I played these chords in myself? You’d think wrong – It was layer by layer creating the chords I wanted.opy and paste and step editor in logic is a good friend of mine.

Copy and paste and step editor in logic is a good friend of mine.

I had previously created some ambience in an earlier project for a university assignment, so I bounced it out and shoved it in to just fill the frequencies that the acoustic instruments wouldn’t. I didn’t want to stretch the boundaries of the ‘acoustic’ instruments further than their real-life range would. Bulk it up with synths or drones rather than stretching an instrument beyond its limits, which might cause complications further on if you were to record it live.

*Friend who plays the bass smiles and waves*

Compared to some of my other projects, the 19 tracks were enough. It looks quite sparse and uninteresting compared to a full 60 track project but with Deluge, simplicity was key.

Add the bus with separate reverbs, a rise as the dream begins to be washed away and in the end, there wasn’t need for layer upon layer of sound. It’s a cafe jukebox. I wanted the cosy feeling, the almost peaceful feeling as the two friends meet.

It wasn’t a horror, it wasn’t a dramatic or tense situation. You needed the audience to feel comfortable as if they themselves were meeting with an old friend for a drink.

How did you think I did? Let me know in the comments below